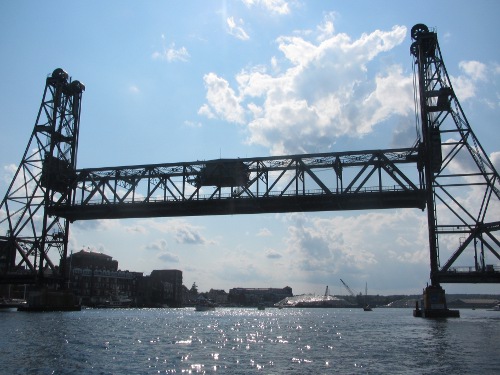 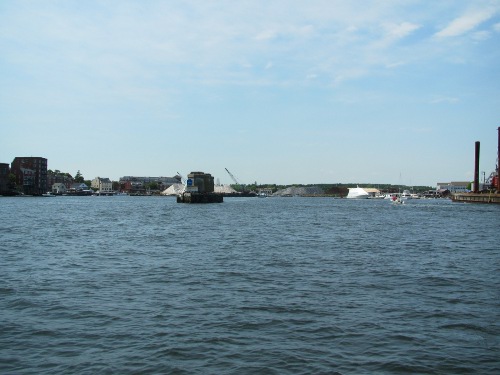 I was chatting with the Portsmouth Harbormaster the other day and in a low, whispery voice, I  told him how much better the harbor looks sans bridge.

“I’m hearing that alot” was his reply.

The condos at  this site are going up. I used to dock there when it was a  restaurant. Portsmouth could use more dock space for transients.

The completed project will be for 4 condos, nice  just four lucky souls. Now if they could get that bridge condemned they really would be sitting pretty. If you look at the  conceptual drawing you don’t want a condo on the bridge side. The walkers on the bridge could be so annoying. That bell ringing every time they raise the bridge( every half hour 7am -7pm). Maybe a really bad  performance of Grease could be torture if you took the Prescott Park side, decisions decisions.

Let’s not forget  all the hell that  Susan Conway had to go  through to get the deal done.

This article below  mentions Malcolm McNeill. I love any chance to spotlight  this fellow.  Whose strategy was the biker bar  ploy?

Here are the options from the Save Our Bridges  site. Interesting that  removal is on the list huh? I found this after writing the post.There is lots of potential for  funny business on this deal. One Harbor Place Condos has some players that might want the bridge issue resolved. The  Judd&Cyrus  Harbor  Tunnel? Let’s think big people.

For the Memorial Bridge, the options that remain are:

No money  on the way for repairs. NH along with 9 other States got no monies for special  projects. Stamford CT lost a project long in the works for downtown, a significant transportation project.

Zip line across the river?

Anyone want  to invest in a bicycle ferry?

Keep your eyes  on this one.

That  bridge is so annoying.