The geese are back in numbers. My pillow is maybe 75 feet from the shore of Clemson Pond.

So I drift  off at night with honking and awake to the same. The geese communicate all night long.

I will miss the geese and frogs, and the constant burbling sounds of Clemson Pond. It is a sewage detention pond and it releases gas that forms bubbles on the surface algae mat. These pop and the  sound is audible, from my living room. Last evening we took a stroll. The Clemson Pond half mile and over to the Swasey. 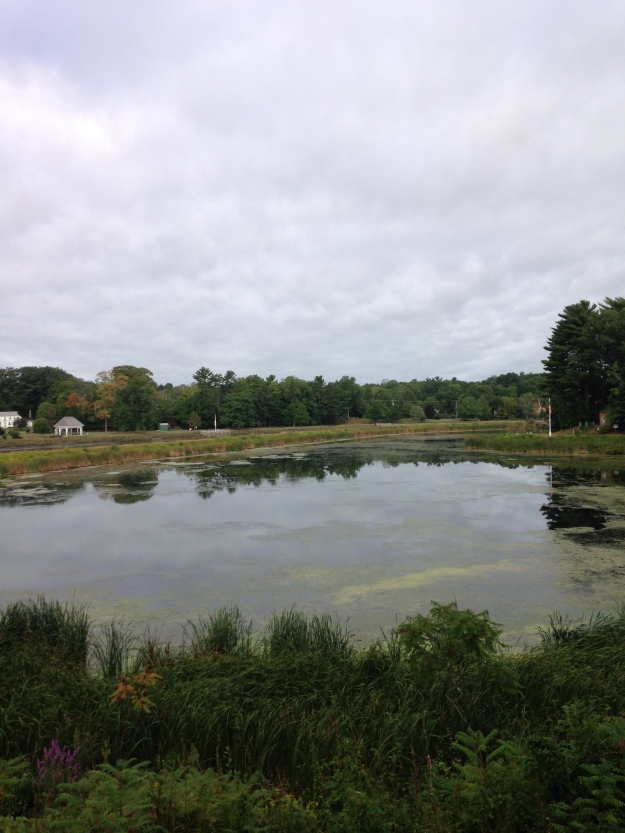 Jon Ring who I spoke with on the walk agreed.

I have the taste and odor of cod liver oil in my brain, it was seared there long ago.

Jon said that he had been by the head of tide pool at dead low tide and had noticed a sheen on the exposed rocks.

The odor dissipated once one was past the Swasey Pavilion.

There is practically no water at all coming over the Great? Dam.

The river walk could be so unique. 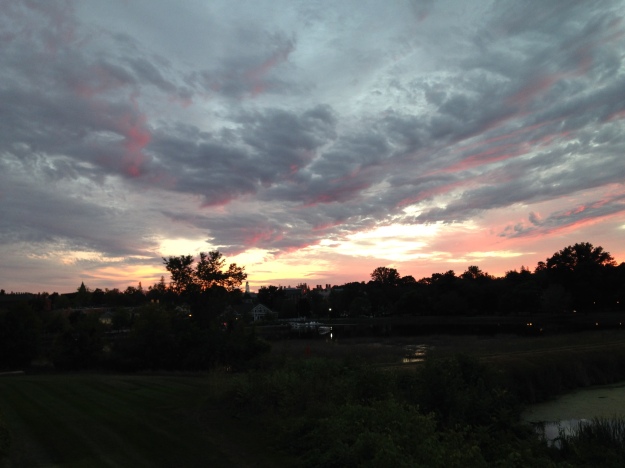 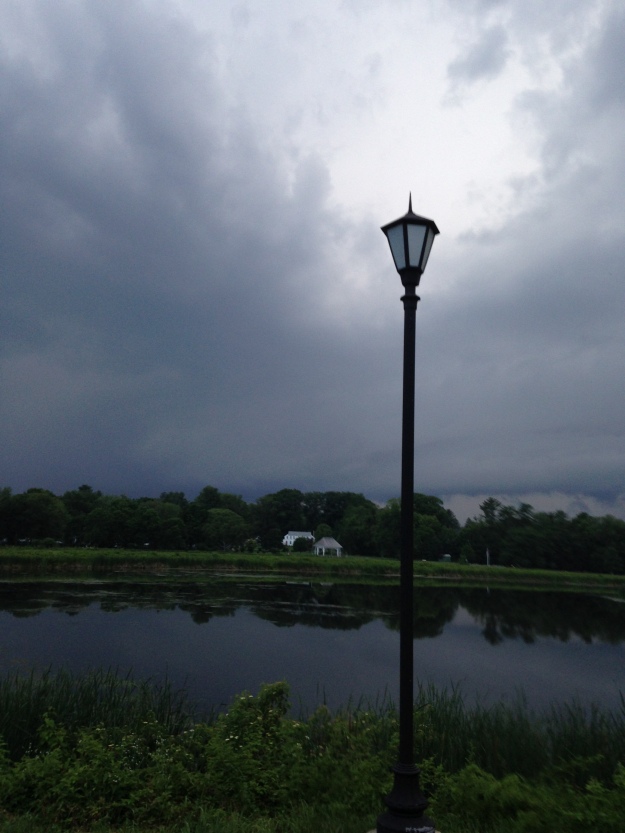 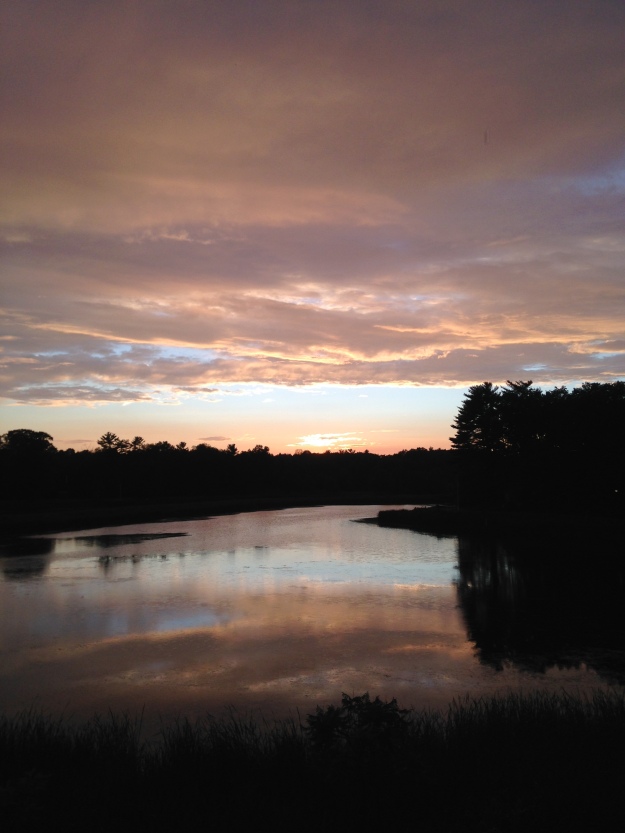 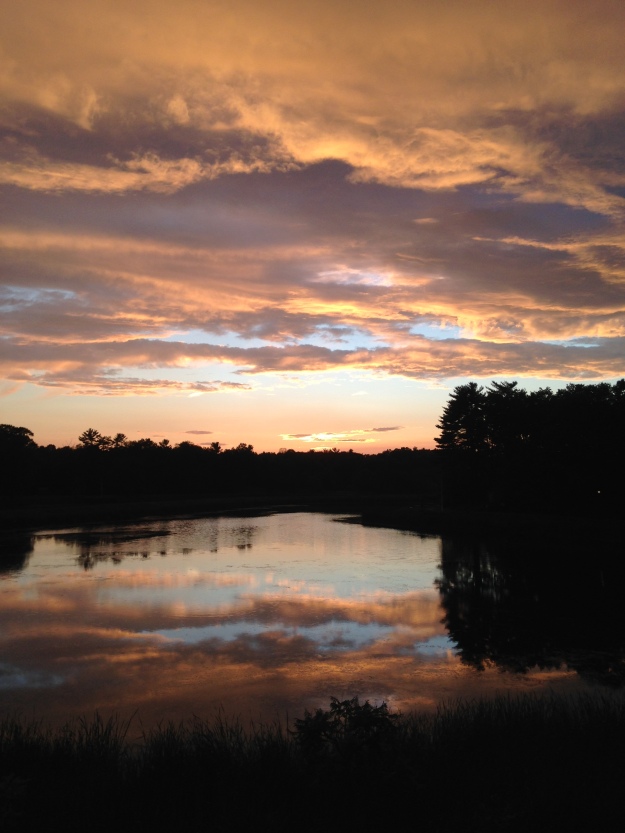 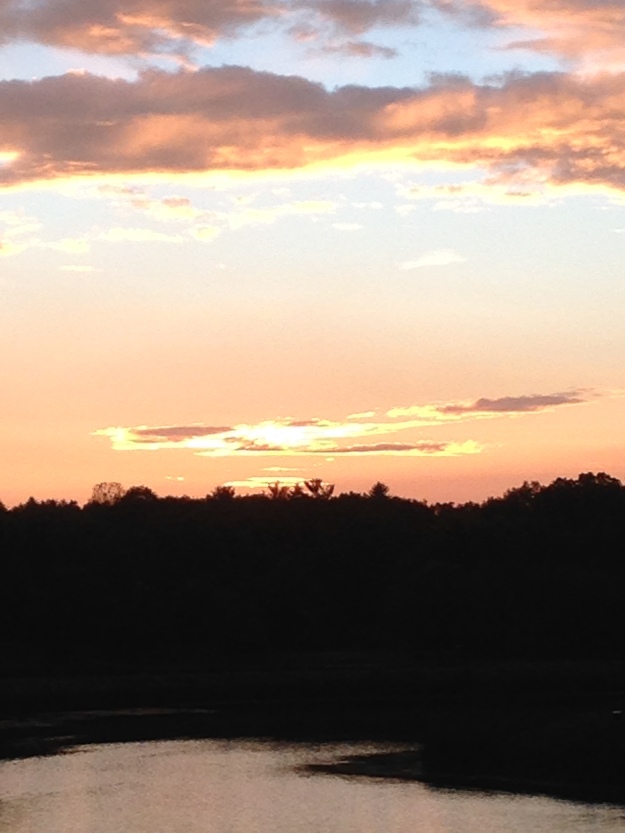 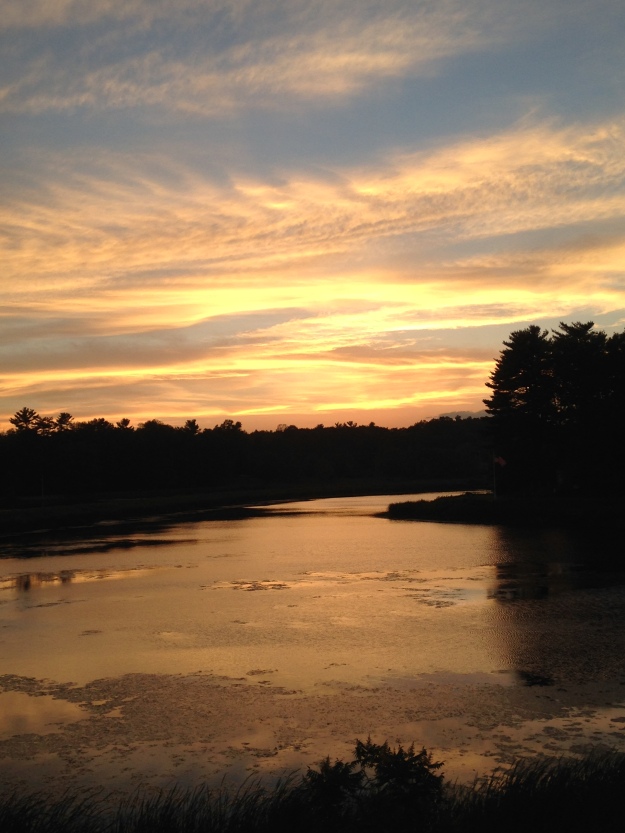 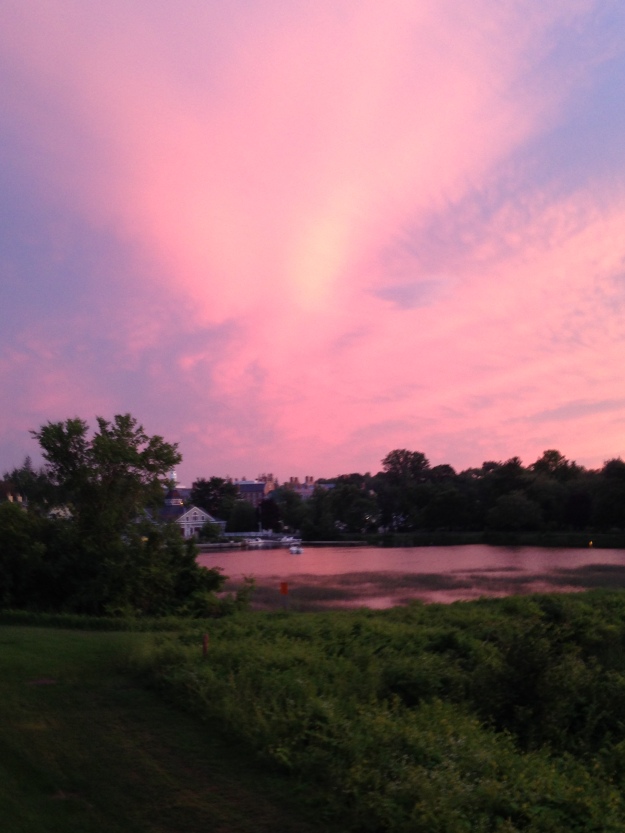 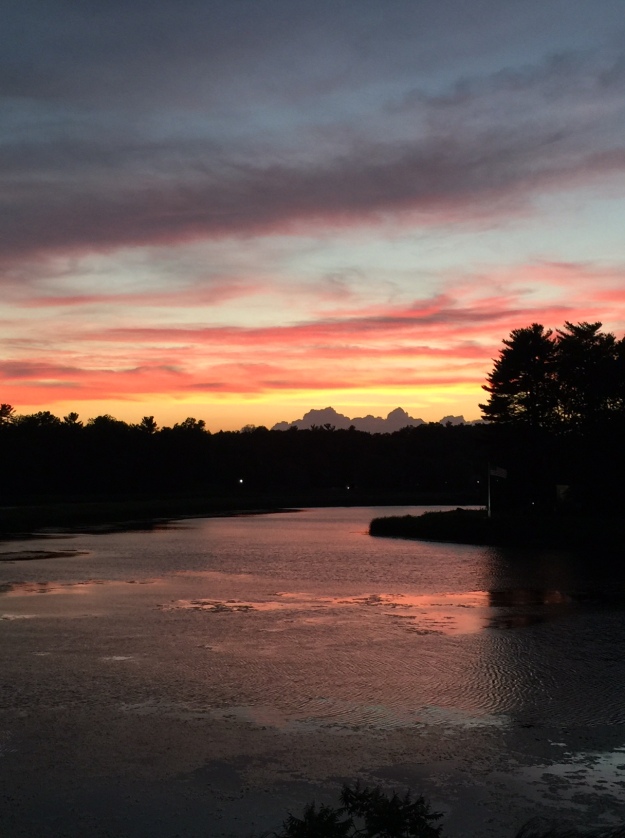 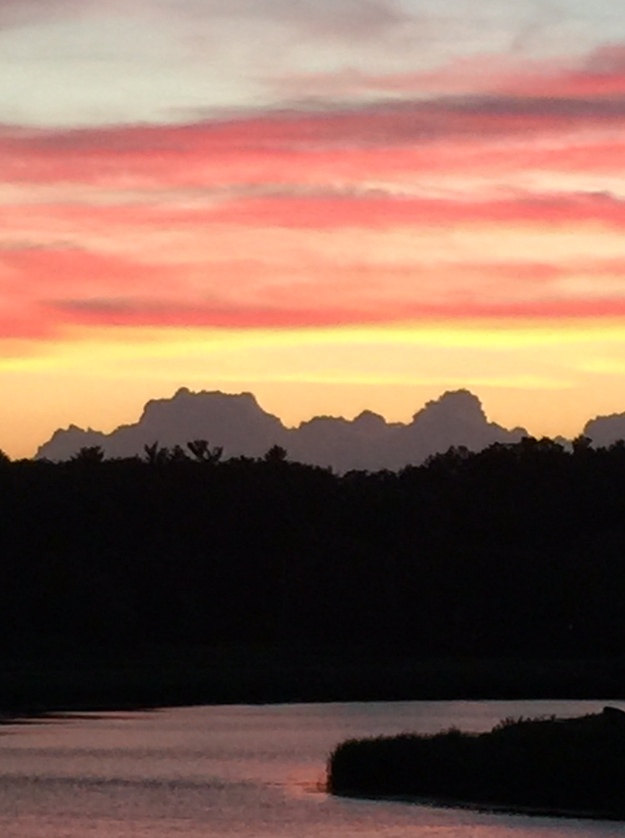 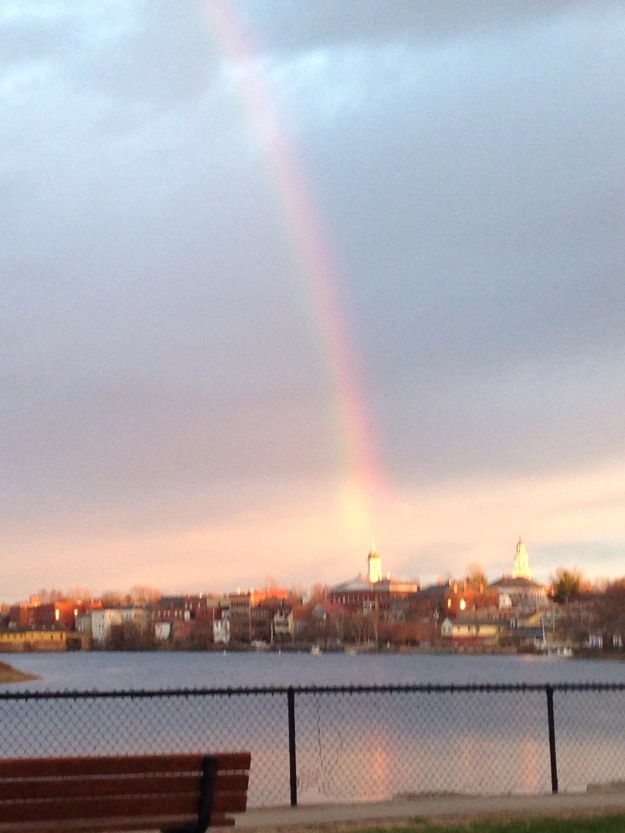 Last evening the naked eye could also discern Mars above and to the left of our Sister planet. 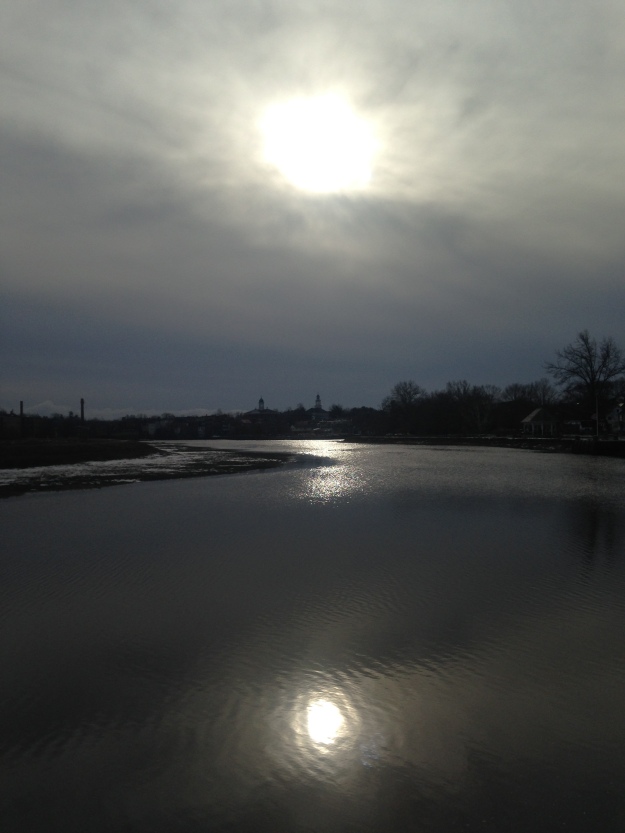 “You’d think that people would have had enough of silly love songs
I look around me and I see it isn’t so, oh no” 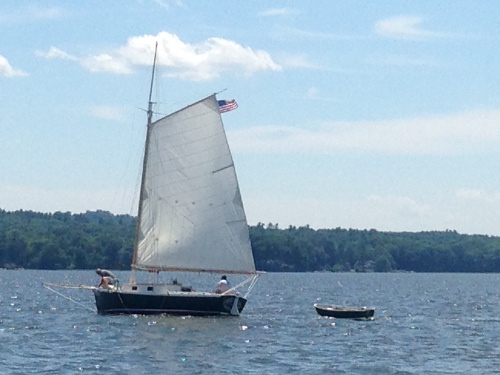 There is a fellow I know that is concerned about contrails that jets leave in the sky as they hurtle to their destinations. I have stepped inside from the patio and brought up the the Flight Aware web site that allows you to see where a flight is going. I just bring up the Pease Tradeport and look at the local traffic. I did this on Sunday June 1st as we had just had an email exchange about contrails and I was  assuring the fellow that it’s just water vapor. A jet was streaking overhead at max altitude so I popped in to check it and was perplexed by a fight plan deviation. I had never seen such a thing. It was an Aeroflot flight headed to Cuba. I am just posting this for its mystery. The Aeroflot jet made a rather odd turn from it’s planned route  ducked up to Greenland, to a point that is all ice, then headed back South.

If you click on the image you will be able to see the  planned track & deviation in greater detail.

This should be interesting, I was working on a post about the sinking of the Empire Knight and  just peeked at the Hassler on AIS  She is indeed working the wreck!

They are having  a busy weekend.

I had wondered about this wreck of late. Seacoast online publishes a great deal of Maine news. A few months ago we had a story about  elevated mercury in lobsters and the shutdown of a lobster fishery in Maine. So when I saw the Hassler doing sand surveys yesterday I was going to call the Hassler team to suggest going North to make some  news.

NOAA made international headlines this week when they released a side scan sonar photo of a wreck in San Francisco Bay. The wreck was located last year just inside the Golden Gate . I really was not that impressed with the image of the City Of Chester ,but it sank  in 1888 in a tragic accident with 16 lost.

I almost purchased a new toy for the boat  this season a new sonar from Raymarine called the Dragonfly, but the size of the transducer threw me a bit. It still may happen but I can wait. This Dragonfly can image wrecks  at significant depth.

Maybe try and “see” the locomotive on the bottom of Portsmouth Harbor, or go try and image the Empire Knight.

In 1990 the US Coast Guard got hold of the manifest of the Empire Knight a British Merchant ship that wrecked and discovered it was carrying a load of casks containing mercury. The area of the wreck is off limits to fisherman and divers. An inspection  found that many casks had deteriorated and the mercury gone.

24 British sailors drowned on February 11, 1944 when the Empire Knight hit a ledge near Boone Island. It was bound for New York City.

There was a treasure hunter that once proposed salvaging the mercury and some spools of wire. The plan was not approved due to unstable nature of the casks. There is approximately 16,000 lbs of mercury still located in the stern holds of the vessel.

It’s deep, lying at 260ft here is a sonar image taken by a NH firm. I hope the Hassler can release their images soon from the survey  which is underway as I type this post.

On L-3’s web site this undated scan was labeled as a training exercise with a new towed device. There does not appear to me to be significant sediments covering the wreck. This was a hope of those that examined the wreck in 1990. The stern of the Empire Knight is I think, hanging off a ledge.

Honestly, I hope the Hassler does a complete survey so one can better understand the position of the ship.

If you are interested  in reading more material I have the empire_knight(3)  NOAA Risk Assessment. The document goes into great detail. I have a lobster maybe two times a Summer, and it’s usually coupled with a trip by boat to Chauncey Creek. The Maine problem with elevated mercury in lobsters (in a specific area) is caused by a land based plume from an abandoned manufacturing site.

I  read this week that the Maine lobster fishery may be going into a slide, due to natural fluctuations. “It was bound to happen ” one fellow said “after so many years of bounty” . The lobster has a long cycle.

I am glad the Ferdinand Hassler is scanning the wreck, it seems to me a prudent use of sailing time .