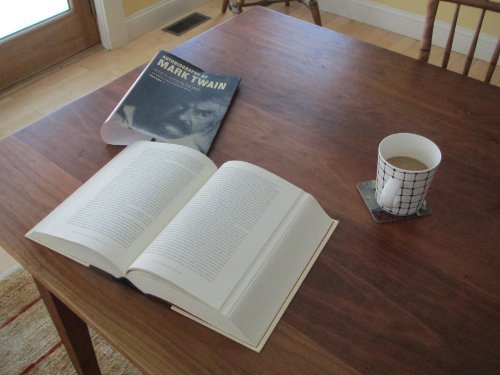 Last Summer in line at Shaws grocery store with my Aunt, we were having some fun with the checkout staff. Her shopping day  is always on Friday unless I am traveling and these few minutes of bantering always produce some gems. One my Aunt loves to repeat came from a fellow two carts back in line after my Aunt made some crack at my expense “Then why didja marry him  then?” the guy shouts. He so enjoyed his moment. My Aunt was also thrilled.

She retold the tale  this week in fact, and it occurred 6 years ago. She has not embroidered at all, and she beams every time.

So as we chat about her purchases   I always try to  come up with something to discuss other than the weather or the People cover  in the rack. So I let one fly. “The Mark Twain autobiography is being released, Twain asked for to to be held for  100 years after his passing” “Why wait so long?”  my Aunt asks . The bagger too inquires  with “Yes, how come he did that?” I answered to all assembled with “So he could be frank without offending anyone living or their heirs”

Then, from  three carts back in line comes a holler from a woman whose appearance would not have afforded you a clue as to her temperament. Two carts back may  be, depending on the subject matter out of play, medical discussion is a one cart back chime in for sure. “I too suffer from carbuncles” Three carts back is someone with something on their mind.

My Aunt has her  check out line gems and I have mine.

The coat of arms of the human race ought to consist of a man with an axe on his shoulder proceeding toward a grindstone. Or, it ought to represent the several members of the human race holding out the hat to each other. For we are all beggars. Each in his own way. One beggar is too proud to beg for pennies but will beg a loan of dollars, knowing he can’t repay; another will not beg a loan but will beg for a postmastership; another will not do that but will beg for an introduction to “society”; one, being rich, will not beg a hod of coal of the railway company but will beg a pass; his neighbor will not beg coal, nor pass, but in social converse with a lawyer will place before him a supposititious case in the hope of getting an opinion out of him for nothing; one who would disdain to beg for any of these things will beg frankly for the presidency. None of the lot is ashamed of himself, but he despises the rest of the mendicants. Each admires his own dignity, and carefully guards it, but in his opinion the others haven’t any.

Mendicancy is a matter of taste and temperament, no doubt, but certainly no human being is without a form of it. I know my own form, you know yours; let us curtain it from view and abuse the others. To every man cometh, at intervals, a man with an axe to grind. To you, reader, among the rest. By and by that axe’s aspect becomes familiar to you—when you are the proprietor of the grindstone—and the moment you catch sight of it, you perceive that it is the same old axe; then you withdraw within yourself, and stick out your spines. If you are the governor, you know that this stranger wants a position. The first six times the axe came, you were deceived—after that, humiliated. The bearer of it poured out such noble praises of you and of your political record that your lips trembled, the moisture dimmed your eyes, there was a lump in your throat, and you were thankful that you had lived to have this happiness; then the stranger disclosed his axe and his real motive in coming and in applauding, and you were ashamed of yourself and of your race, recognizing that you had been coarsely affronted by this person whom you had treated hospitably. Six repetitions are sure to cure you. After that (if you are not a candidate for reelection), you interrupt the compliments and say, “Yes, yes, that is all right, never mind about that; come down to business—what is it you want?”

No matter how big or how little your place in life may be, you have a grindstone, and people will bring axes to you. None escapes.

Also, you are in the business yourself. You privately rage at the man who brings his axe to you, but every now and then you carry yours to somebody and ask a whet. I don’t carry mine to strangers; I draw the line there—perhaps that is your way. This is bound to set us up on a high and holy pinnacle and make us look down in cold rebuke upon persons who carry their axes to strangers.

Now then, since we all carry axes, and must, and cannot break ourselves of it, why has not a best way to do it been invented by some wise and thoughtful person? There can be no reason but one: from the beginning of time each member of the human race, while recognizing with shame and angry disapproval that everybody else is an axe bearer and beggar, has all the while deceived himself with the superstition that he is free of the taint. And so it would never occur to him to plan out for the help and benefit of the race a scheme which could not advantage himself. For that is human nature.

But—let us recognize it and confess it—we are all concerned to plan out a best way to approach a person’s grindstone, for we are all beggars; a best way, a way which shall as nearly as possible avoid offensiveness, a way which shall best promise to secure a grinding for the axe. How would this plan answer, for instance:

Never convey the axe yourself; send it by another stranger, or by your friend, or by the grindstone man’s friend, or by a person who is friend to both of you.

Of course this last is best-best, but the others are good. You see, when you dispatch the axe yourself, you are making one thing absolutely certain: the grindstone man will be all ready with a prejudice against it and an aversion, before he has even looked at it. Because—why, merely because you have tied his hands, you have not left him independent, he feels himself cornered, and he frets at this, he chafes, he resents as an impertinence your taking this unfair advantage of him—and he is right. He knows you meant to take a mean advantage of him—with all your clumsy arts you have not deceived him. He knows you framed your request with deliberation, to a distinct end: to compel an answer.

I respect my own forms of passing the hat, but not other people’s.