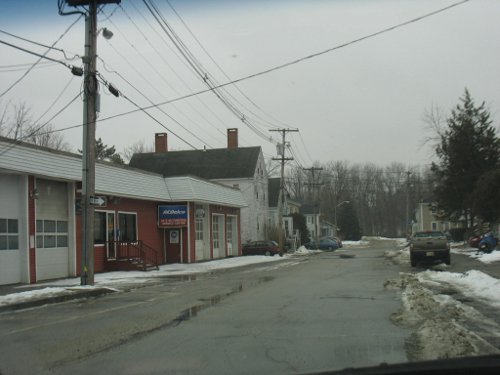 This shot of the former Als Auto  downtown is not the view that impresses, it would be the view as you motor past the throat of Franklin Street while still on Water. I will insert another photo later. This area has the potential of being a brand new arm of the Downtown district.

The TIFF proposed for the possible Exeter Mill expansion into the  upper parking lot and open area on Chestnut Street could be the funding mechanism for this grand scheme. The new residents that fill that apartment building will be the customers for all the new shops and restaurants.

There could be a river walk, hopefully alongside a dancing, flowing river.

The Long Block would stay put, the rest of the area gets zoned commercial, and razed.

One developer gets handed a clean site and we get a fantastic new area to enjoy and the Town gets revenue.Drive through the area slowly , check out the open parking area once occupied  by the towing firm.

I was down there one night picking up Doozie from a massage therapist in the Long Block.

It was early evening and the drivers were horsing the huge tow trucks in and out of the garage, into the parking lots, back out again.

This ballet went on for some time.

I thought to myself that the neighbors must be overjoyed at their departure.

If the Town does not move fast , there will be another auto related business, you could almost count on it.

What a great opportunity, but such a tiny window.

Here is link to a planning document for small towns while it was written in 2006, it still makes some very good points  useful for consideration.

As long as we are talking about doing great things for the Downtown let me  share something else.

The tax bill for this landmark, high visibility property gets sent to NJ. I think a note should be sent to the owner.

Could you hire a guy with a bucket and brush , some water and bleach, to clean up this eyesore?