No mention yet of recent protests staged in Maine to stop this plan to ship crude to the East Coast . The West Coasters  said no way.

I was just stopped on Main at Lincoln Street for a very long freight train. It had 3 locomotives, and the rest were tank cars, if there  were less than 70/ 80 of these bulk carriers I would be lying.These are identical to those that got loose in the Canadian tragedy. I jotted down the placard number affixed to the tankers that identifies cargo.

I just checked the number upon my return.

So these are empties.

Headed North then West across Maine to the oil fields in Canada?

It would seem  odd to to me that protestors bent on protecting the environment from  spills, and now the very real spectre of worse tragedies in Maine, would have missed another transit point, from the South.

The news outlets, some,  are awakening from their slumber and have quit calculating the costs of reporting and  commenting.

My son Bryce  is taking a finance course this summer at Harvard and had the print version of his class supplied WSJ sent to me.

I have a treasure trove of newspapers on my credenza.

Today the WSJ front page story is about  deep safety concerns  over rail transport of crude oil on the heels of this holocaust in Quebec.

This terrible tragedy could have  been prevented.

The Bangor Daily News was asking questions on June 10th, 2012.

If you enjoy getting dizzy from time to time just look at the wiki on Pan Am Railways, or the general history of railroads in NE. I have been at it all night.Trying to untangle who owns the tracks, who maintains them, who runs the equipment, who provides security, who leases the tracks, who inspects, who has oversight. My eyes are wide open now about the terrible state of rail transportation,and this desperate grab for oil sand crude( which is a bitch to clean up, as it’s  gritty) to simply stay afloat. These aging tank cars are rolling  right through towns and villages and along sensitive waterways, wait a minute, all waters are sensitive.

All towns are special.

The town of Lac Megantic was destroyed. 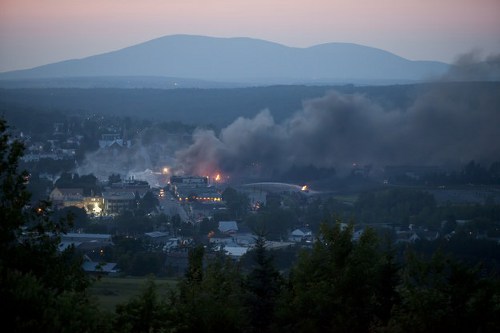 Think about that and the still unaccounted victims in Quebec of corporate greed coupled with complete and utter disregard for the environment and the lives of people.

Pan Am Railways has been forced to pay hundreds of thousands of dollars in fines for environmental damages,   spills, track maintenance issues. A fine, the settlement,the environmental insult forgotten.

You should be blowing the whistle, when policies are not being followed, laws broken, or “it’s” just plain wrong, wherever you work, whatever you do.

You should stand up.

If you are unfamiliar with the Canadian Oil Sands here is an excerpt from  an article written in 2009 National Geographic Magazine .

I would bet the numbers are inaccurate now, the size of the mining area, importation figures. The article stated that 19% of our imports are Canadian.

“Nowhere on Earth is more earth being moved these days than in the Athabasca Valley. To extract each barrel of oil from a surface mine, the industry must first cut down the forest, then remove an average of two tons of peat and dirt that lie above the oil sands layer, then two tons of the sand itself. It must heat several barrels of water to strip the bitumen from the sand and upgrade it, and afterward it discharges contaminated water into tailings ponds like the one near Mildred Lake. They now cover around 50 square miles. Last April some 500 migrating ducks mistook one of those ponds, at a newer Syncrude mine north of Fort McKay, for a hospitable stopover, landed on its oily surface, and died. The incident stirred international attention—Greenpeace broke into the Syncrude facility and hoisted a banner of a skull over the pipe discharging tailings, along with a sign that read “World’s Dirtiest Oil: Stop the Tar Sands.”

There are some photos contained in the article ,well of course , it’s National Geographic.

The Lawrence Eagle Tribune weighs in with some local information.  Seacoast online still is using wire service articles. The comments to the Eagle article that deride efforts by those concerned about the environment are beyond the pale.

Really, why even type the nonsense , just go about your own business as it’s quite obvious from your comment that’s all you care about .

15 years ago Exeter had a train derailment just before Fort Rock Farm outbound to Maine that included hazardous materials, though none leaked. This  Eagle Tribune article also quotes NH officials saying that our RR tracks are well inspected due to  sharing the track with the Downeaster. I am pretty sure that the Amtrak train was authorized for higher speeds but the track owner did not or has not  upgraded the tracks to be able to hit that number.

The transportation of crude oil by these tankers is new, and the rolling stock being used is unsafe, at any speed. The walls of the tanks are easily breached in an accident.

Honestly,  is it at all reasonable to be transporting oil shale crude from the Dakotas to New Brunswick , Canada, then back to us as refined products?

Why is this oil not refined in situ?

So the trains rolling through our Town are filled with crude oil.