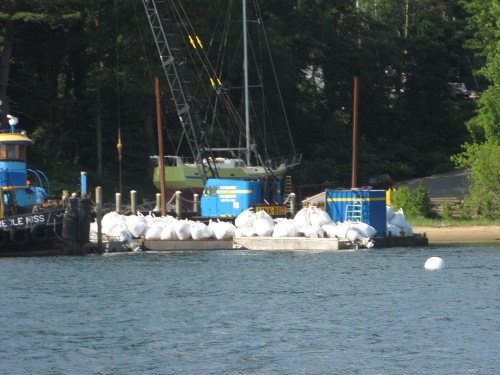 Last weekend we  spotted another load of oyster,surf clam and quahog shells  being readied for Great Bay. This load was being staged at Pattens Boat Yard dock on the Piscataqua River  in Eliot Maine. If you  order your favorite bivalve at many local restaurants the shells are picked up  by volunteers  for  eventual use in artificial beds. The shells are the perfect substrate for oyster spat to attach and grow.

Oysters consume nitrogen-containing compounds (nitrates and ammonia), removing them from the water.[6] Nitrogen compounds are important phytoplankton nutrients. Phytoplankton increase water turbidity. Limiting the amount of phytoplankton in the water improves water quality and other marine life by reducing competition for dissolved oxygen. Oysters feed on plankton, incidentally consuming nitrogen compounds as well. They then expel solid waste pellets which decompose into the atmosphere as nitrogen. In Maryland, the Chesapeake Bay Program plans to use oysters to reduce the amount of nitrogen compounds entering the Chesapeake Bay by 8,600 metric tons (19,000,000 lb) per year by 2010.

This photo was taken  last Summer in Furber Strait, near Fox Point.

The oysters are going to require some heavy lifting from all of us, they cannot do it alone.

Closing  out just now I found this article  on Boston.com

CONCORD, N.H.—A half million juvenile oysters the size of a thumbnail are being readied to rescue New Hampshire’s Great Bay from an environmental meltdown.